SAP reported a huge cloud revenue increase for Q3 at a time when many of its rivals in the traditional enterprise apps space are struggling with cloud. Here are the numbers.

SAP executives focused their discussion during a call with financial analysts Tuesday on the momentum of their cloud-based offerings, including flagship suite S/4HANA core, Employee Central cloud HR solution, and SuccessFactors HCM Solutions, among others.

SAP’s impressive cloud momentum comes at a time when many traditional technology companies with roots in on-premises applications are struggling with the move to the cloud and gaining marketshare there. Plus, there’s a new lineup of pure play cloud-based competitors such as Salesforce.com and Workdaythat are competing for this business, too. It’s against that backdrop that SAP reported huge cloud momentum and revenue growth, with efforts in both public and private cloud.

“One of the things we’ve done as a company is take an open ecosystem approach to innovation,” CEO Bill McDermott told analysts during the call. “We have the global public cloud offerings that also include our business networks. We now have S/4HANA in the public cloud but we also have a very nice private cloud business with the HANA enterprise cloud growing in the triple digits.”

New cloud bookings at SAP grew by 102% during the quarter.

McDermott also pointed out some competitive wins, including one against rival Oracle.

“The University Hospital Frankfurt has decided to switch from Oracle database to SAP HANA to run their SAP applications in the HANA enterprise cloud,” McDermott noted. 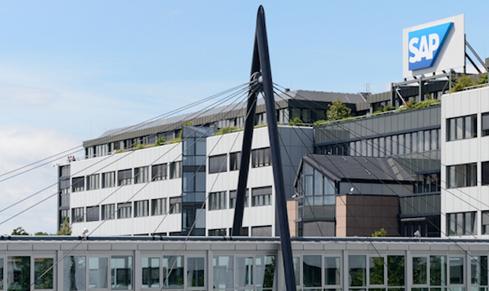 And while SAP and SAP partners host a raft of their own offerings, McDermott also affirmed the company’s commitment to supporting its platform in big third-party public clouds. The statement came in response to an analyst question about the CIO of General Electric’s recent commitment to move the company’s workloads to AWS.

“SAP has always believed in customer choice,” he said. “You haven’t seen any trash talking between Amazon or AWS and SAP because we think if a customer wants to run on that highly efficient infrastructure and they want to take our high profile innovation and combine those two things they should be able to do that.

“We have been very vigilant in working closely with Microsoft, with IBM, with HP, with Amazon to make sure they are certified on the highest standards of performance and security of our technology so that the customer gets the ultimate best benefit possible … they should be able to run it where they want to run it.”

Here’s a rundown of the company’s overall financial results for the quarter.

Financial markets rewarded SAP’s performance with higher stock prices today. SAP stock was trading up this morning after the earnings announcement with shares opening at $75.61 after closing at $74.76 the day before.